Nimble Boats were originally the brainchild of Jerry Koch.  Jerry had a diverse array of interests including photography, news, international travel and, of course, boats.

As a young man he had an obsession with black and white photography.  He took classes at the College of Marin in California from Bill Current, a world class photographer, who ended up becoming a lifelong friend. Jerry made his first mark photographing the land, but his heart ultimately belonged to the sea.  He purchased his first boat, a Cal 20, in his twenties and just a few years later fell madly in love with a sketchy Lapworth wooden racing sloop that had definitely seen much better days.

Jerry's days were spent at his job as the head of a photography lab, but his nights were spent moonlighting as a one-man boat repair shop as he carefully restored “Sayonara” to her former racing glory. After owning and subsequently disowning several sailboats, Jerry came to the realization  that his “perfect” boat just wasn't out there. He decided he would have to design it and build it himself.  He sought out the talents of reknown designer Ted Brewer, who designed a 41 foot motorsailer for him. Not only did Ted design Jerry's perfect boat for him, but the two developed a friendship that lasted a lifetime. 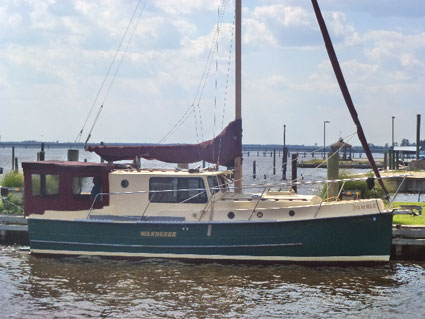 Jerry accepted a once in a lifetime job opportunity to be the first director of field operations for CNN. He relocated to Atlanta for his new job and there he plied both trades: building boats and bringing news to the masses. Through the years Jerry nad his good friend Ted Brewer spoke endlessly about boats, design, and construction. Ted designed numerous boats for Jerry to build, including the jaw-dropping Rob Roy in 1982.

In 1984 Jerry moved to Florida to devote the rest of his life to building his beloved boats. He founded Nimble Boats in Clearwater in 1985, building the Nimble 20 and Nimble 30 sailboats. Jerry continued his partnership with Ted Brewer and together they went on to design many “perfect” boats including the Nimble Nomad, Artic, and Wanderer.

Jerry, who struggled with an array of physical maladies, eventually succumbed to a massive stroke on October 6, 2003.  Ken McCleave, who built the fiberglass parts for Jerry, refused to stand by and watch the Nimble line die.  So he took action and pulled together a consortium of partners who have dedicated themselves to keeping these unique designs alive.