Mochi Craft was purchased by the Ferretti Group in November of 2001. Since then they have designed a fleet of boats ranging from 44 to 74 feet, each of which is available in six different colors. The Dolphin 51 was the first to be unveiled in 2003. The Dolphin 74 was the next model released to a very enthusiastic boating public at both the Genoa Boat Show in October of 2004 and the 2005 Dusseldorf Show. The Dolphin 44 made it's first appearance at Cannes in 2005. The Dolphin 64 was launched during the Genoa Boat Show in 2006 and shortly after, the Dolphin 64 Fly was publicly presented as a new and more sophisticated flybridge version of the most eclectic lobster boat in the fleet. In 2007, the Dolphin 54 was debuted and was available in both a sun top and a flybridge version. 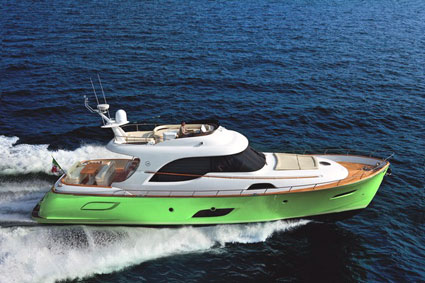 The admiration of Mochi Craft lobster boats has led them to be awarded with a number of acknowledgements and become well know and appreciated world wide. Mochi Craft has essentially reinvented the old lobster boat style with updated, larger versions of the traditional Down-Easter. The Mochi's rounded shapes easthetically revisit the natural lines of the lobster boats of the fifties with a playful, modern touch. Mochi Craft has given new life to the splendors of the past, reinterpreting them with Italian sensitivity, technological innovation and reliability.