Grand Banks Yachts and Grand Banks Trawlers began in the mid-sixties with the introduction of the salty looking and very seaworthy Spray. This workboat-inspired design featured a semi-displacement hull and was the origin for the ever-popular Grand Banks 36 Yacht. Since that time, Grand Banks Yachts and Trawlers have evolved into today's line with designs ranging from 36 to 66 feet. Within this range, there are a number of deck and cabin configurations that offer an assortment of interior plans and options.

Grand Banks took the traditional design of the downeast cruiser in 1993 and captured it's allure with the launch of their Eastbay Series. With it's definitive Ray Hunt design and it's bold dark blue hull with a contrasting bright gold stripe, it stood out among the rest.

In 1991, Grand Banks launched the Aleutian Series. The series was designed to satisfy the many owners who were ready to command a larger vessel but were not willing to sacrifice quality to do so. The Aleutian delivered. 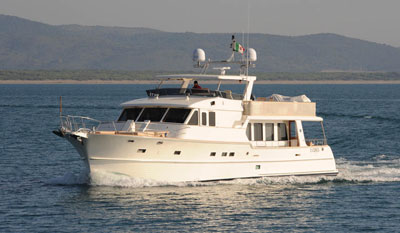 Common to every Grand Banks Trawler and Yacht design is an uncompromising approach to quality, craftsmanship and engineering excellence. The overall styling of the Grand Banks Trawler has been noticed by other yacht and trawler builders who introduced fleets of look-alike yachts that were marketed using dozens of names.

In each and every series of yachts that Grand Banks builds they seek to capture the spirit of the nautical superlative and combine it with state-of-the-art equipment and painstaking craftsmanship along with superior construction methodology. These are some of the reasons that Grand Banks yachts have become yachting hallmarks around the world, and why they continue to meet the high standards of discriminating and serious boaters to this day.

January 23, 2013 - Galati Yacht Sales in Michigan is appointed as Grand Banks representative in the Great Lakes.

February 16, 2012 - Grand Banks Yachts announces two new models, the 50 Eastbay and the 43 Heritage EU, at the Brokerage Show in Miami.