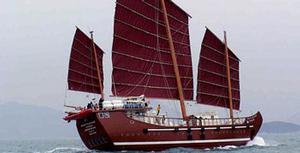 Cheoy Lee: There are few yacht builders in existence today with either a product or company history as long or as diverse as Cheoy Lee. Now in its fourth generation of operation, the shipyard is owned and operated by eight brothers, the same family who established the yard over a century ago. Beginning in 1870, with a building and a repair yard at Po Tung Point in Shanghai, Cheoy Lee began producing steam powered craft.

After 1936, the family moved the business to the British territory of Hong Kong. By the mid 1950's, the shipyard diversified into the production of teak sailing and motor yachts and the success of the newly formed pleasure craft division was soon apparent. By the mid 1960's, 90% of the company's production was pleasure craft, with many vessels being exported to the United States. During the 1960's, Cheoy Lee was one of the pioneers in the development, testing and use of fiberglass construction techniques, and soon thereafter, wood construction was phased out. Constantly improving the product, the shipyard was to become a forerunner in the use of GRP/Foam sandwich technology in the marine field, commonplace today. In 1977, Cheoy Lee built the world's largest GRP vessel of the time, the 130' motorsailer "Shango II."

With advances in GRP technology, the shipyard is able to build large "one off" custom motoryachts, like the Frank Mulder designed 145' "SeaShaw," launched in 1996. The company's main production facility has moved from Lantau Island, the main shipbuilding facility for over 50 years, to a new purpose-built, state-of-the-art shipyard facility on the Pearl River at Doumen, 60 miles from Hong Kong on mainland China. This facility is reached via ferry from Hong Kong, with Customs and Immigration located next to the yard. The new shipyard is at the center of over 20 shipyards in the area, providing a huge pool of skilled labor in the area and an almost unlimited capacity to expand. This 30-acre facility is now in operation, including a 1,000 ton railway lift, a 150 ton travel lift, dedicated paint sheds and on-site dormitories that house up to 400 yard employees. Capable of producing vessels in excess of 200 feet, the new yard promises to keep Cheoy Lee in the forefront of shipbuilding for generations to come.

With some 5000 vessels built to date, Cheoy Lee has delivered an extremely diverse range of both commercial and pleasure craft. Tugs, ferries, supply vessels, patrol boats, motorsailers, trawlers, sportfishers, motoryachts and mega-yachts have all been delivered, with many more on the way. World class naval architects including Jack Hargrave, Tom Fexas, Frank Mulder, Sparkman and Stephens, Don Shead and Arthur Robb, to name a few, have had their designs built throughout the years. DESIGNED, BUILT AND EQUIPPED FOR THE AMERICAN MARKET Whether commercial or pleasure, almost all Cheoy Lee designs can and have been built to class, as the yard has worked with most classification societies including Lloyds, A.B.S., Bureau Veritas, D.N.V. and Hong Kong Marine Department. Because the Hong Kong dollar is directly pegged to the US dollar and America is the largest pleasure craft market for Cheoy Lee, the company maintains its own purchasing, sales and marketing department in Fort Lauderdale, Florida, which is staffed by a team of experienced professionals in the yachting industry.

The vast majority of equipment and systems on every North American Cheoy Lee yacht are either American made, or are used and readily available in the United States. Generators from Northern Lights, Westmar bow thrusters and hydraulic systems, full size U.S. galley appliances, navigational and hi-fidelity systems that are truly cutting edge, are all procured in America.