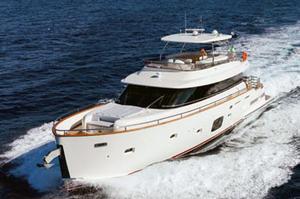 The Azimut Yachts history started when the company was founded by Paolo Vitelli in 1969. Since that time Azimut has devoted its efforts to gain the exceptional knowledge to design and assemble fiberglass yachts.

1985 saw the purchase of the Benetti shipyards in Viareggio, Italy by Azimut. This acquisition gave them the ability to build steel hulled yachts to over 120 feet in length. The Azimut Yacht has few equals in the world due to its dedication to the research and development of innovative materials. The innovative Azimut Master Guarantee covers boats for five years against osmosis and structural breakdown. This guarantee is in addition to the engine manufacturer's five year guarantee. Azimut's hallmark interiors offer handcrafted precious woods with superior finish and meticulous attention to the smallest details. Style and comfort are just as much a part of an Azimut Yacht as its performance and dependability. 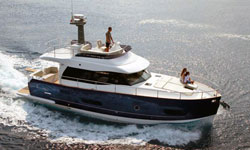 2011: As an addendum to the main article above, Azimut is an Italian builder of yachts who is located in Avigliana which is a province in Turin. The company was established in 1969 by Mr. P. Vitelli.

Starting out as a charter company for sailboats, Azimut later became a builder of large luxury yachts. Their first major contract was with the shipyard of Amerglass, which is a Dutch ship-yard that was producing boats manufactured with fiberglass. Azimut’s business developed quickly due to their distribution of sailboats, motor-cruisers and eventually motor yachts from different builders such as British Powles, Westerly, and others. The company eventually purchased the assets of Benetti, another luxury yacht building company.