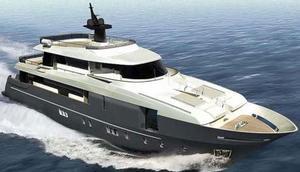 Aicon Yachts, built by The Aicon Group, entered the world of luxury yacht design in 1999. The group was founded in Milan in 1993 and specialized in the design and supply of furnishings for commercial purposes. In 1996, they moved into nautical furnishings and three years later began designing and building luxury yachts.

In 2005 two new yachts were designed and added to the line up, this time catapulting Aicon into the Open yacht market. A new production site was created to support the building of the new designs. A year later, in 2006, the Aicon 85 Fly and the Aicon 62 Open were launched, successfully expanding both

lines yet again. In 2008, the introduction of the Aicon 82 Open led the company into the sporty megayacht segment of the market.

Aicon Yacht is represented in the United States, Europe, the Middle East and Africa by a strong dealer network. Aicon pays very close attention to the style and luxury of their yachts. They are built not only with a focus on beauty but function, comfort and seaworthiness as well.