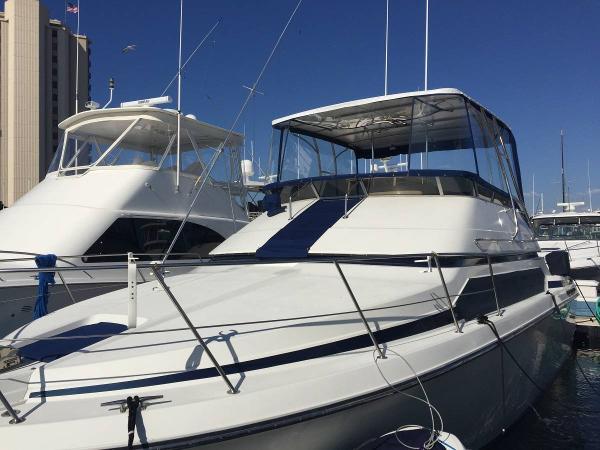 Solana is a very rare find in that no expense has been spared on this beautiful Custom Santego. Her owners undertook extensive upgrades on the assumption that they would keep this boat for themselves for years to come. Having decided to trade up to a larger boat, they now realize that they can never recover all they have spent on her. This is your chance to cash-in on a once-in-a-lifetime value of a like new boat at used boat pricing.

New bottom paint done in 2015. Thru hulls, all ball valves, all sea strainers, cutlass bearings, resurfaced props, hoses and countless miscellaneous items were all replaced with updated and modern components.

The strataglass is in great shape. It is clear and provides the skipper and crew with great visibility. The flybridge has new marine speakers.

The flybridge, cockpit and swim step feature all new Decadence flooring for added comfort and security.

All new electronics, navigation and communication equipment have been installed. State of the art Raymarine Touch Screen, Radar, GPS, Chart Plotter, Sounder and Fishfinder. A new Raymarine Autopilot was installed in 2017.

A completely new Faria gauge package was installed at the flybridge helm (starboard/port) in 2014. A new rocker panel switch bank was installed in 2014.

The starboard 454ci with Crusader exhaust was rebuilt in 2013. It has 200 hrs. on the meter. The V-drive and transmission were rebuilt this year(2017). A brand new bronze water pump and all hoses and belts were installed in 2014.

LED lighting has been installed throughout for lower energy use.

The Vizio flatscreen TV is new, as is the Sony surround sound and sound bar in 2016.

The air conditioning in the main salon was new in 2015.

Stereo speakers are installed for listening pleasure. The forward A/C unit was brand new in 2010.

A new Igloo counter top ice maker is convenient and easy to use.. A 7 gallon hot water heater has enough capacity for cooking and personal showers.

Galley cabinets are equipped with slide out drawers.

The head is accessible through separate doors from both the main salon and the master sleeping area. It features a VacuFlush toilet, a sink with hot and cold running water, plenty of counter space and a large vanity for storage of personal toiletries.

The BBQ  shown on the aft deck is excluded from the sale.

Anything that is not physically attached to the boat is to be considered personal property of the owners and not included in the sale.