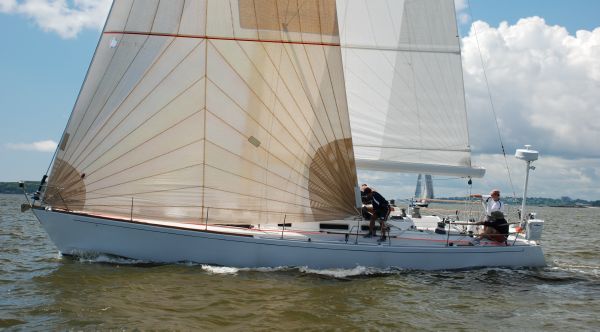 RESOLUTEÃ?Â is a J/44 that has been loved by her owners. This is hull number one of the highly successful J/44 model which was originally owned by Bob Johnstone. This 44 is unique in that she is the only J/44Ã?Â with a triple spreader carbon fiber mast and now has an electric Leisure Furl System which makes this boatÃ?Â anÃ?Â incredibly stiff and easy to sail, performance offshore cruising boat also one of the few equipped with a generator (new in 2010).

She is extremely well set up for serious offshore cruising with a generator, watermaker, Espar cabin heater,Ã?Â Leisure Furl mainsail furling, new oversized 3 speed primary winches, electric main halyard winch etc. She has been stored in inside, mostlyÃ?Â heated storage, every year since 1999 though outside shrink wrapped the last 4 years.

The list of upgrades is impressive, please check the full specs under "Additional Information/Yearly UpgradesÃ?Â for details and you will understand why this is the best J/44 out there....on or off the market and represents the best value!!!

The boat has the popular plan "B" layout with two cabins and two heads.
Forward is a large owner's cabin with a 7 foot long V-berth with filler piece.  The hull sides (ceilings) are varnished teak planks refinished in 2004. Shelves, full length, port and starboard. Under the berth are two large storage bins, two drawers and two lockers.

Aft of the berth to starboard is a cabinet with drawers and a teak louvered locker below along with a large double teak louvered cabinet locker above. Aft of this is a large hanging locker. To port is a wonderful head with a large separate shower stall. The toilet was replaced in 2005 with a large bowl, all new plumbing and new fresh water hoses and Grohe faucet in 2006. There is a varnished teak shower grate, teak seat and wet locker outboard in the shower stall. All the teak doors and trim throughout the boat is varnished. There is access to the head from the forward cabin and from the main salon. The head has a molded sink and storage cabinets and shelf. There is a full length mirror on the side door.

Aft is the main salon with a centerline dropleaf table with a storage bin in the center, varnished teak frame and leaf fiddles. There are port and starboard settee berths, a port side pilot berth and to starboard custom varnished teak cabinets that could house entertainment system electronics.  Outboard of the settees there are storage cubbies behind the sea backs.

The navigation station is aft to starboard which is a very large outboard facing nav. table with lots of chart storage and a great sliding tray with many dividers for pencils, etc. Under the nav. table aft of the swing out nav. seat are two drawers, one being a full size file drawer. Every manual and literature on all the vessel components is filed here with room to spare in the back of the deep drawer.

Aft of the Galley is a second head with a new elongated toilet, all new head and fresh water plumbing. A doorway to the aft cockpit locker and access to the engine. Opposite the head, to starboard, is the separate aft cabin with varnished teak ceilings, cabinets, drawers and hanging locker.

The interior finish throughout the vessel is the Herreshoff style with white bulkheads and varnished teak cabinet doors and trim.  All of the varnished trim was re-done in 2004 with 2+ coats as appropriate.  The cabin sole is varnished, teak and holly with approximately ten coats of varnish refinished in 2004 and was given two fresh coats throughout in 2013. The ventilation is wonderful with nine openings and seven deck hatches. The interior is light and airy.

Fully equipped for coastal cruising and offshore sailing/racing.  All electronics save the wiring for the autopilot are new since 2002 - much of it more recently.  The B&G Hydras are set up with repeaters P&S at the break in the cockpit coamings to be convenient to the helmsperson and there are two additional displays in the pod over the companionway as well as one unit at the Nav. Station.  The Robertson Autopilot received a new display and "brain" in 2004, new hydraulic ram in 2005 and the remote was new in 2000 essentially leaving only the wiring as original installation.  The ICOM VHF was upgraded to handle AIS in 2009

At the Nav. Station

Fiberglass end grain balsa cored hull with vinylester resin in the exterior laminate.  The hull finish is Awlgrip done in 2003 White with Aristo Blue cove stripe and handsome blue/white/blue/white boot top.  The bottom is finished in green epoxy antifouling and has been kept well sanded to avoid any paint build up.

Originally built for J/Boats co-founder and co-owner Bob Johnstone, this J/44 has enjoyed good care and extensive upgrading.  Always in inside heated storage in the off season since 2000 she shows well and is exceptionally well equipped.

Sailing World identified the J/44 as the Boat of the Year in 2000 and Fortune Magazine has identified J/Boats as "One of America's Best 100 Products."  The J/44 is remarkably easy to sail for a 44' yacht and even more amazing is their performance.  As an example, all five J/44s in the 1990 Bermuda Race beat all of the Swans from 48-61' on elapsed time!  Built to American Bureau of Shipping +A1 standards, the J/44 received the highest rating possible for offshore service.

Her last two owners have sailed her seasonally in Maine and have stored her in inside heated storage for over six months a year and have lavished her with superb care and given her extensive upgrades over the past decade.  As that list is so comprehensive, you would not note it in reading through the listing so that has all been recaptured and summarized below below.

She is for sale as her owner has substantial overseas business travel requirements over the next two years which will prevent any substantive use, she is seriously for sale and and serious offers are encouraged.

Disclaimer
The Company offers the details of this vessel in good faith but cannot guarantee or warrant the accuracy of this information nor warrant the condition of the vessel. A buyer should instruct his agents, or his surveyors, to investigate such details as the buyer desires validated. This vessel is offered subject to prior sale, price change, or withdrawal without notice.