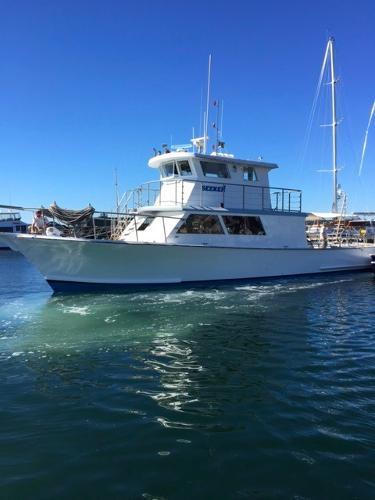 This 65' Harker's Island Rhode Craft is located in Rhode Island

This dive boat was made famous in the book, Shadow Divers. She is located in Rhode Island, and
has recently been restored to allow her to get back in the water.

As many in the dive community know, Seeker has been dry docked for several years and many thought she would never sail again. Well, thanks to the current owner she is in the water and ready to go back to work.

Here is just an example of the amount of work that was done in the past year:

Paint ...
In short everything you need to put her back to work. There is still some work to be done to the interior, but compared to what has been done, that's minor.

If you are a serious diver, The Seeker (and it's crew from the 1990's) are probably known to you.

If you are not familiar with the story, The Seeker is a 65' Rhodes Craft dive boat. The following comes from Wickepedia:

"In 1991, Bill Nagle a former wreck diver and the captain of the Seeker learned about a wreck outside New Jersey and decided to mount a diving expedition to the site. On September 2, 1991, an unidentified U-boat wreck was discovered 73 meters (240 feet) deep (a hazardous depth for standard scuba diving) off the coast of New Jersey. Nicknamed the U-Who, the exact identity of the wreck was a matter of frequent debate, and initially the wreck was thought to be either U-550 or U-521. The discoverers of U-Who, John Chatterton and Richie Kohler, continued to dive the wreck for the next several years, taking considerable risks (three divers,died exploring the U-869).

Eventually, the team recovered a knife inscribed with "Horenburg", a crew member's name. However, they learned at the U-boat archives that U-869 was supposedly sent to Africa, so this piece of evidence was initially discarded. A few years later, they found part of the UZO torpedo aiming device, and spare parts from the motor room engraved with serial and other identifying numbers. On August 31, 1997 they concluded that the boat they found was the U-869."

Many have perished diving on wrecks, and The Seeker, has seen her share. She is still regarded, even today, as one of the best dive boats around.

The story is fascinating and the movie rights have been purchased by a major motion picture studio.

If you are a dive fan, please get the word out that Seeker is back in the water.

Seeker is designed to be an offshore research/dive vessel.  Seeker is a USCG Inspected Vessel, licensed to carry passengers for hire as well as a licensed Commercial Fisheries Head Boat. The vessel has both fore and large aft deck with a large upper pilot house. She is all white with a red stripe and blue bottom. At the current time the boat is in need of some TLC and minor refit work.