Ocean Master Boats was founded by, and is still 100% owned by Mark Hauptner, a man who has designed, built and raced boats for over 50 years and is considered one the true pioneers of the classic Palm Beach sport fisherman.

Mark was confronted by a customer of his Mercury engine dealership back in 1974 who was voicing his frustration over not being able to find a center console boat that met his expectations. He was specifically looking for a large (31 foot), outboard powered center console that was capable of making the 220 mile journey through the islands of the Caribbean and back. A boat that, at the time, would have been considered ridiculous by the industry. 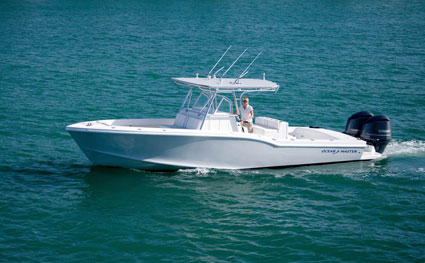 Eventually, Hauptner decided the only option was to build such a boat himself, and the Ocean Master 31' was born. The original 31 footer, appropriately named "The Only One", changed the concept of outboards in the marine industry. It was the first large outboard sport fisherman ever built that could fish well offshore and compete squarely with the best inboards available.

Today, with Mark Hauptner at the helm of the company (and in the factory every day overseeing operations) Ocean Master boats are being built the right way for a limited number of clients. There is no mass production or cutting corners. Ocean Master boats are strictly built for offshore conditions and sportfisherman that exist in the real world - not magazine articles.