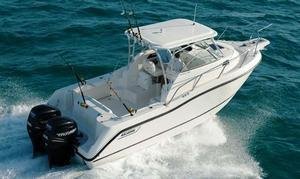 The first Boston Whaler boat was very petite at just 13' long and didn't look like any of the others boats at the 1958 Boston Boat Show. But that little boat had a very large impact and it was the beginning of a legend.

Shortly after that first Boston Whaler, and the more than seventy thousand just like it that followed, those Whalers seemed to be everywhere! They were able to tackle “big water” that no 13’ boat could handle before. Their celebrity grew as the reports about the boat that could support 10 people even when filled with water continued to proliferate. Additionally, the little Whaler would still float after taking a thousand rounds of automatic weapons fire. The little Boston Whaler would even run when it was cut in half, as long as you had the half with the engine. 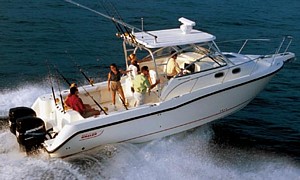 . This was an amazing innovation then and it continues on to be one that's still extraordinary today.

Boston Whaler continues to conceptualize and build peerless designs that meet the boating industry's diverse and changing needs. Only Whaler can bring you an unsinkable, legendary boat that is engineered for a lifetime of enjoyment and dependability on the water. Only Boston Whaler can offer you an Unsinkable Legend.