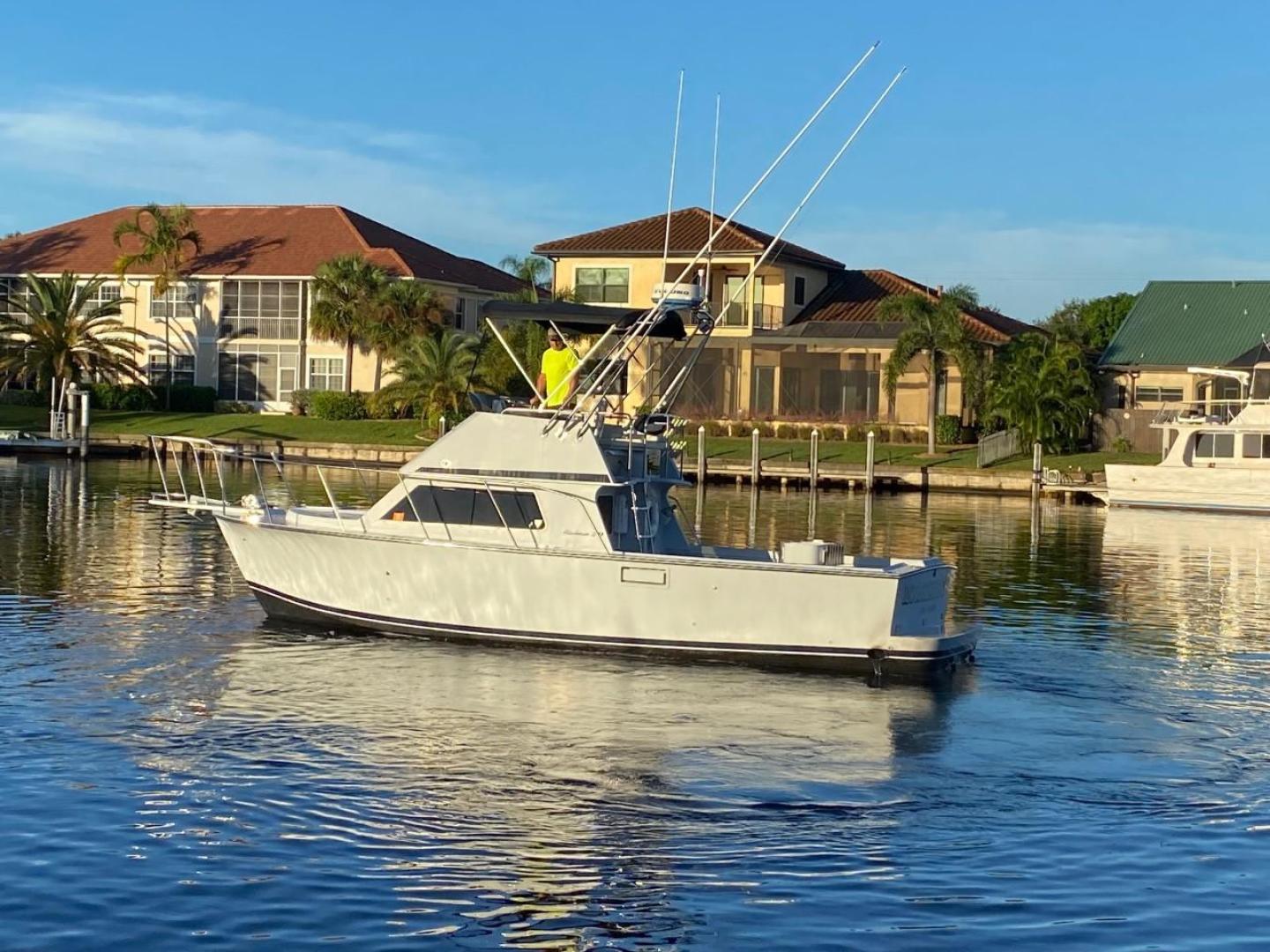 ** ONE OWNER SINCE NEW

Blackman boats were built in San Diego and are a semi-custom line of boats ranging from 20 feet up to 65 feet.

Owner had the boat built in 2001 for his family in San Diego. She was brought to Punta Gorda, Florida in 2015.

In preparation for this sale, owner had a number of upgrades and repairs made 2021 .

A rare and beautiful semi custom sport fishing boat doesn't come along like this very often!

The hull is cold molded with Airex core and fiberglassed inside and out. The finish is Linear Polyurethane. She tops out at a little over 30 kts and cruises comfortably at 22-25 kts on twin Yanmar 4LHA-STE engines

The boat does NOT have a generator set or A/C but there is plenty of room to add them.

The electronics are vintage 2001 (Furuno Radar and fathometer, ICOM radios, Robertson AP21 autopilot; the Northstar 952X GPS finally died this year). Whoever purchases the boat will need to upgrade them to their preference.

In preparation for this sale, owner had a number of upgrades and repairs made 2021.

- All the seacocks and through-hulls were replaced with Marelon seacocks that are epoxied into the hull.

-The windlass was replaced with a Lewmar Profish, a new inverter and battery charger were installed and all 4 batteries were replaced with AGM batteries.

- Both motors have new mounts, new turbos from Atlantic Turbo and the heat exchangers were removed, hot tanked and pressure tested.

- The belts and hoses were replaced throughout.

- The shafts were pulled and new cutlass bearings were installed, the dripless shaft seals were replaced and the props were tuned.

- A new microwave was installed and all outlets were replaced with new GFI outlets.

- The interior cushions are in great shape, the cushions on the bridge will need to be replaced at some point.

- Fresh bottom paint was done in August 2021 just before she was launched after the refit.

OVERALL CONDITION: The hull is a modified-V, planing type made of FRP (fiber reinforced plastic). The topsides have light grey gelcoat with a blue boot stripe. The gelcoat was in good condition with minor scratches. Athwart ship reinforcement is enhanced by partial FRP bulkheads. There were no signs of distress or water intrusion sighted at the bulkheads. FRP stringers run the length of the hull and appeared serviceable where sighted. The transom is FRP and is also in serviceable condition. Bilge areas were clean. The large chain locker drains to the bilge. Moisture meter readings on the hull were dry. The deck was in serviceable condition with no signs of delamination or impact damage noted. The hull to deck joint is the overlap type with marine sealant and stainless fasteners. It is in serviceable condition.

DECK CONSTRUCTION: The deck is molded FRP (fiber reinforced plastic) with grey gelcoat and non-skid surface.Moisture meter readings were mostly dry. Non skid is in serviceable condition with no signs of distress noted.

COCKPIT: The cockpit is molded FRP (fiber reinforced plastic). It has short bulwarks at the stern and sides.There are five hatches in the sole that access the engines, batteries and the steering gear. A bait well is centered near the transom. It is in serviceable condition and is well secured to the cockpit sole. There are several rod holders attached to the bait-well that are also in serviceable condition. Hinges and latches were serviceable.

INTERIOR DESCRIPTION: Forward of the cockpit there is a head and galley to starboard with a dinette to port and a v-berth in the bow. Well fitted cabinetry is Formica with hardwood trim. Hardwood door into the head is well fitted. Textile head liners are in good condition. Plywood flooring is serviceable with hatch access to holding tank, bilge pump and shower sump. 12 volt lighting throughout was operable. Fresh water fixtures in the head and galley were also operable.

GALLEY: The galley is to starboard midship. It has a single stainless sink basin in a Formica countertop that is in serviceable condition. There is a faucet with hot and cold supplies that operated when tested. There is an under-counter Norcold refrigerator (Model # DE441)(Serial # 881896HD) that runs on 12 volts and 120 volts. The refrigerator powered up on 120 volts but did not power up on 12 volts. There is a Kenyon Butane one burner stove that was not tested. The stove appeared serviceable

MAIN ENGINES: Propulsion is provided by two Yanmar (Model # 4LHA-STE)(Port Serial # 51122)(Starboard Serial # 51092) four cylinder inboard diesel engines. They are rated at 260 HP each. The indicated hours for the port engine is 2122. The indicated hours for the starboard engine is 2119. The throttle control are Morse electronic type. The throttle controls at the helm were operational. Engine mounts and beds are adequate. Oil level was correct. Exhaust is raw water cooled. Hose connections were double clamped. Lift mufflers and hoses were serviceable.

TRANSMISSIONS: The transmissions are ZF's (Model # HSW 630 A1) with direct drive. The gear ratio is 1:1.56. The transmission fluid levels were correct. The shift controls at the helm were operable. Thecouplers are in good condition

HOSES AND CLAMPS: Hoses and clamps were serviceable.

MAIN ENGINE(S) FUEL SYSTEM: One aluminum fuel tank with a capacity of 206 gallons located under the cockpit sole. The fuel fill fitting and fuel tank were grounded. The ABYC required manufacturers label not sighted. Fuel fill is on port rail aft, and labeled "Diesel". Fuel fill hose is rated A-2. Primary fuel filters are Racor type with metallic shields as required by ABYC. Racor filters were serviceable. Fuel was clear with no signs of water or debris in filter bowls. Hoses and clamps were serviceable where sighted. Supply and return lines were rated A-1.

ELECTRICAL SYSTEM (DC SYSTEM):The 12 volt DC system consist of four Interstate (31MAGM) group 31 batteries rated at 925 cold cranking amps and 100 amp hours each. Three of the batteries are wired in parallel making up the house bank. There is overcurrent protection (T-Fuse) at the bank. There is a a charging relay connected to the forth battery that appears serviceable. The batteries are secured and in a spillproof covered box. The positive terminal on the battery furthest to port has more than four connections. There are battery switches, one for each engine that were operable. The panelboard in the galley is clearly marked and breakers are properly labeled. There is a DC voltmeter located at the distribution panel. The meter is operable. There is a Xantrex Truecharge2 battery charger located forward in the engine space. It is rated at 10 amps at 12 volts. The charger powered on and indicated acharge. There are alternators mounted on both engines. The alternators output was not verified.

ELECTRICAL SYSTEM (AC SYSTEM): The AC system is 120 volt rated at 30 amps. The inlet located in the cockpit was serviceable. The main breaker and branch breaker are located at the distribution panel in the galley. The breakers at the panel were properly labeled. All breakers were serviceable. There is a voltage meter at the board that was operable. 110 voltage outlets run throughout the vessel. All outlets tested for power and polarity. There is a polarity indicator on the panel that appeared serviceable.

CONDITION OF HULL (WETTED SURFACE): The hull's wetted surface was sighted and sounded with a phenolic hammer approximately every 6" to 8" and was found to be fair, sound and serviceable with no readily detectable evidence of delamination in the hull.

1. The engines started without excessive cranking.

9. The back down tests were satisfactory.

10. There were no excessive vibrations noted.

11. There were no oil or coolant leaks observed. (On main engines or in exhaust water)

The company offers the details of this vessel in good faith but cannot guarantee or warrant the accuracy of this information nor warrant the condition of the vessel. A buyer should instruct his agents, or his surveyors, to investigate such details as the buyer desires validated. This vessel is offered subject to prior sale, price change or withdrawal without notice.