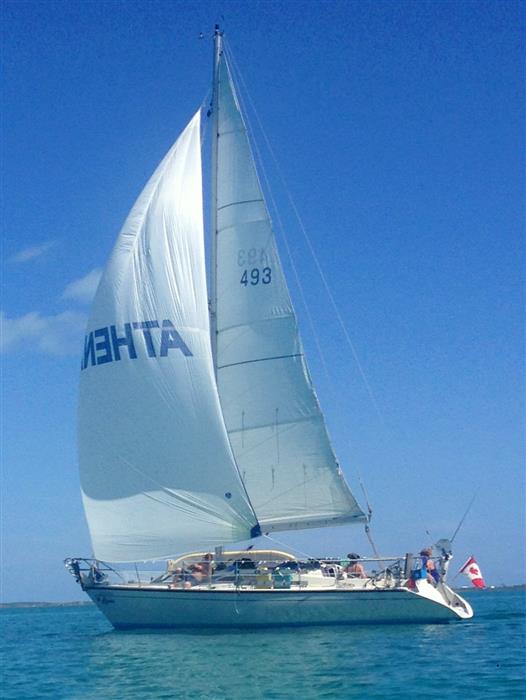 ATHENA is the "classic" Dehler, noted for her performance and Germany construction.  She is easily handled by two, or even one if desired.  Her mahogany interior is very nice and leaves you with the warm "ship-shape" feeling when aboard.  On all wind angles she is a very good performing boat, and has been a success with over 1200 being built.

ATHENA has been cruising the Bahamas for the winter of 2014, is in very good condition & ready to go for her next owner. She was just put into drydock here at Stuart, has been cleaned, and gear left aboard in good condition.  Her owners have outgrown her, and are looking for a further horizon, on a larger vessel.

ATHENA is a 2-cabin boat, with a forward vee berth that sleeps two, and an aft cabin with a quarter berth to sleep two more persons. The aft cabin has a hanging closet as well as opening ports.  In the main cabin there are two single berths on each side of the main table that is in the center of the cabin.  Aft of the nav station on the starboard side you will find the enclosed head with a sink. A fresh water shower is outside in the cockpit for a quick rinse.  Of special note is that access from the cockpit to the salon is via two steps, and not a ladder !!!