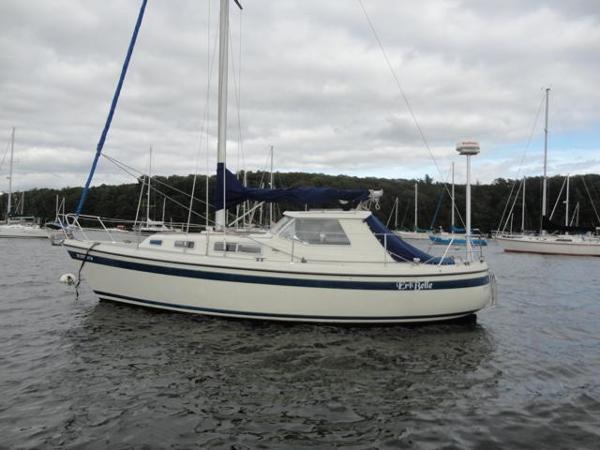 She is a magnificent example of a canoe stern pilothouse sailboat, which typically provides excellent sea keeping ability.

She comes equipped with radar, GPS, auto helm, and has a white bimini top over the cockpit as well as a blue mooring cover.

Very comfortable below she's a great example of Danish boat building. The LM in this case stands for  Lunderskov Møbelfabrik. (I know-  easy for me to say). Let's just stick with LM.

Powered by a Yanmar diesel with only 261 hours on it.

All LM boats came with a very complete list of standard equipment, including lifelines, pulpits, speedometer, depthsounder, boarding ladders, anchor and rode, fenders, fire extinguishers, and even dishes and cutlery.

She does have a crack in the forward hatch that has been repaired so there's no leakage, but you might want to consider getting it replaced.

The 32 shares all the obvious characteristics of the LM line—particularly the distinctive canoe stern and pilothouse. In most respects, it is simply a larger version of the smaller models. The boat is 32 feet in length and has a 27-foot, 10-inch waterline; its beam is 10 feet 8 inches, and it draws 4 feet, 11 inches. The bilge keel models (called twin-keel in some brochures) draw 4 feet, 1 inch. Displacement is 12,000 pounds, with 4,400 pounds of ballast.

The LM32’s cockpit is sizable considering that canoe-stern boats usually have shortened cockpits. There are bench seats on each side of the cockpit, and a large fold-out table easily can seat six. The boat has a white canvas bimini that covers the cockpit.

There are lockers under each of the bench seats—propane tanks on the port side—and a huge locker under the cockpit sole.

At the top of the rudder-stock is an attachment spot for the removable tiller, which can be used if you want to sail from the cockpit rather than from the pilothouse. The wheel steering in the pilothouse has a mechanical disconnect so the tiller moves freely.

At the forward end of the bench seats on each side are the halyard and reefing lines, which run inside a channel on the side of the pilothouse and terminate in cam cleats in front of stainless  winches.

The mainsheet has a single cam-cleat attachment point at the back edge of the pilothouse, and the sheet hangs down into the cockpit.

At the front of the cockpit, double sliding doors open up to the pilothouse. On the starboard side is the steering station with a raised captain’s seat and a second fold-up seat that slides out so two people can share the helm. A wood steering wheel is immediately ahead, and engine controls, the electrical panel, and sailing instruments are directly in front of the helmsman.

The chart table is immediately ahead of the wheel. This setup is good for laying down a chart so the helmsman can see it.

The pilothouse’s front windows have windshield wipers, and the front center window opens up for ventilation. An interesting feature is a sliding hatch above the wheel and seat that allows the helmsman to stand up for a good view of the sails, deck, and seas.

On the port side of the pilothouse is a compact galley, with a two-burner propane stove and a small sink. The front-loading refrigerator is underneath the stove, and storage drawers extend all the way outboard to the hull.

The pilothouse steps down into the saloon, which has a settee on the port side and a dinette/double-berth to starboard. Forward of the saloon is the head to starboard, with a hanging locker opposite. The head also has a teak grating above the sump, making it possible to shower in the head. Fixed ports on each side offer lighting.

The cockpit table folds and tucks into a dedicated slot in the stern.

The rig is a conventional, single-spreader masthead sloop. The chainplates are close to the deckhouse, so the sidedecks are adequately wide.

With its pilothouse and canoe stern, you might expect it to sail like a motor sailor, but it’s nimble and relatively quick, much like a conventional modern sloop.

The boat can be sailed from the cockpit, using the attachable tiller.

The appeal of LM boats is definitely in their appearance. If you like a pilothouse and the idea of a canoe stern, this boat is for you. She is well-made and sails well.

This boat is shown by appointment only. Please contact the listing broker.

Default
The Company offers the details of this vessel in good faith but cannot guarantee or warrant the accuracy of this information nor warrant the condition of the vessel. A buyer should instruct his agents, or his surveyors, to investigate such details as the buyer desires validated. This vessel is offered subject to prior sale, price change, or withdrawal without notice.
customContactInformation